↓ Skip to Main Content
Home › Uncategorized › Repository Fringe Day Three: What happened, what the best hacks were (and who won the lego, again!)

Repository Fringe Day Three: What happened, what the best hacks were (and who won the lego, again!)

This is our rather belated summary of Day Three (Friday 2nd August) of the Repository Fringe. It was a very busy final day of talks, pecha kuchas and the Developer Challenge and it has taken us the long weekend to catch up!

We started the day with a set of Short Presentations, each acting as an introduction or follow up to Round Tables in the programme. Chris Awre reminded us that a Hydra has one body and many heads (it’s the one bit of Greek mythology you can count on any repository person to know!) and asserted the importance of having an engaged and active community to support technological tools. Then Andrew Dorward and Pablo de Castro continued the community theme talking about the UK RepositoryNet+ progress in building out the socio-technical infrastructure for shared respository services. Finally Angus Whyte reviewed the current status and aspirations for the DCC‘s work in supporting repositories and librarians (and others) to support and embed research data management (RDM). Angus also highlighted recent research into the priorities of libraries – and how RDM and repositories fit into that – which sparked some lively questions around who drives strategy around repositories and RDM. 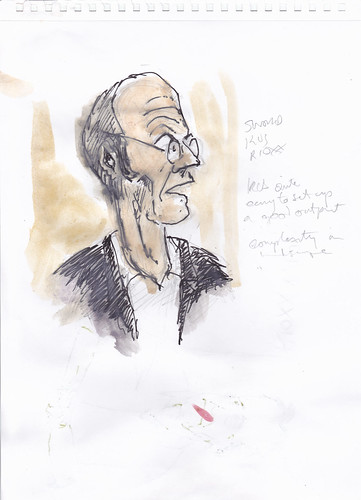 After coffee we moved into Round Tables. the all-important Developer Challenge judging process.

Pablo and Andrew followed up their short presentation with a round table on Shared Repository Services (UK RepositoryNet+ continues). The session was videoed and is split into two sessions on YouTube: Part 1 and Part 2.

Sarah Jones and Angus Whyte of the Digital Curation Centre led a round table discussion around the question “How can other stakeholders support repositories on research data?”, a very timely issue given the increasing expectation and research funder mandates around the sharing of publicly funded research.

And in our parallel strand developers and our judges gathered to view and discuss each of our Challenge entries. This proved to a be a really productive session for exchanging ideas and expertise. Once all five hacks had been shown and questions and chat about each had taken place it was time for a judgely huddle to form and make the difficult decisions over prizes… 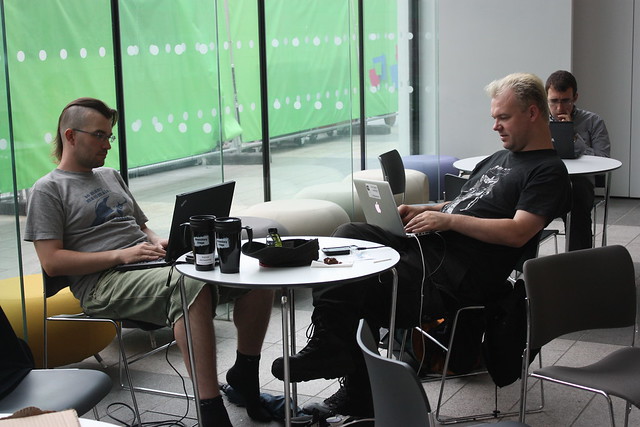 In the Developer Challenge area three hacks are tweaked and progressed.

After lunch we came back together again for a series of short presentations. Paul Walk talked about the RIOXX Metadata Application Profile and Vocabularies for OA (V4OA). Paul particularly focused on RIOXX, a pragmatic project addressing the challenge of improving the quality of metadata in institutional repositories which has resulted in guidance for repository managers and a supporting application profile, although RIOXX will be depreciated in favour of FundRef going forward.

Chris Keene was our next speaker who channeled The Vapours to bring us a talk entitled “I’m turning enterprisey (I really think so)” which outlined how Sussex Research Online had been adapted to be both the University of Sussex’s institutional repository and a suitable REF system – and what this has meant for the role of the repository and how it can develop: “managing a repository in 2013 feels really different”.

Without even a pause we moved into another fantastic set of Pecha Kuchas for which, yes, there was more lego at stake! 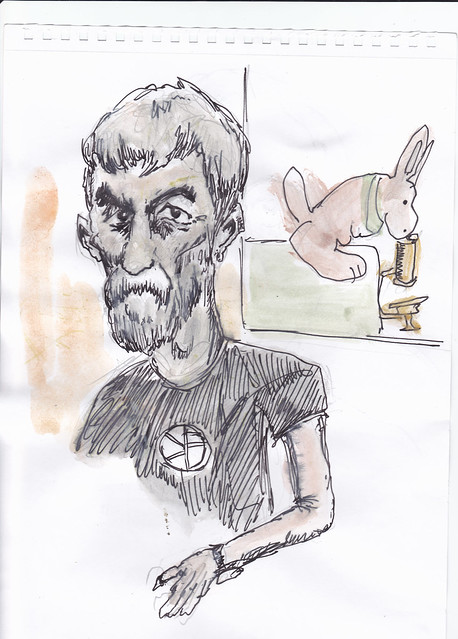 First up – after a little emergency remixing of speakers – was Peter Murray-Rust or, more accurately, his marvellous #animalgarden plush collective – looked at repositories for scientific data. The comic book slide format was a bit hit with the audience so a viewing of the video is highly recommended!

Next Matt Taylor talked about the embarrassing but common problem of small data sets and his work on RedFeather, a solution that is effectively a repository in a single server-side script. Matt’s unique way of presenting this work again makes this a must-see video.

Our third Pecha Kucha in this session came from Sebastian Paulcha who took us through the implementation of Durham E-Theses with a significant nod towards a theme of this week: the repository of the future.

A wee break for questions enabled us a pause to introduce Professor Les Carr. The new title was bestowed during Repository Fringe and we can’t think of more appropriate timing as Les is one of the originators of this marvellous unconference! 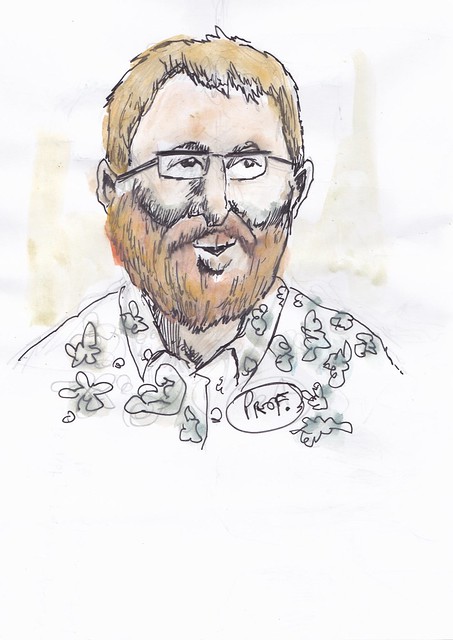 Prof Les’ talk wove together unexpected elements from CERN to Robert Maxwell to tell the story of Open Access and developing attitudes towards openness and commercialisation. And ended his energised whistle-stop tour with the Finch Report-inspired provocation:

Whose side are you on?

Our final Pecha Kucha came from Scott Renton. Scott gave a “light bit of advertising” for the image collections at the University of Edinburgh, outlining how these were digitised, managed, stored, and made discoverable. Scott’s slides included his own sketches which you will also see scattered throughout the Repository Fringe 2013 Flickr group (see also the image of Les above) as Scott has been our dedicated RepoFringe live-sketcher!

The Pecha Kucha session concluded with questions and, of course voting. As we broke for voting and a coffee break one lovely participant came forward to ask about our networking/business card contest. Unfortunately she hadn’t been able to attend day one of the event but had baked her own fortune cookies! We will feature pictures of these shortly in a special post on all of the inventive networking ideas we saw across the event. In the meantime huge kudos for an exceptional idea and baking success!

After coffee it was time for some prizes. Nicola Osborne announced the Pecha Kucha prize winner, a landslide victory for Matt Taylor. This means that two Lego Calendars are heading to Southampton – thankfully they are highly interoperable so Matt and Pat should be able to create their own hacks – 14 day weeks perhaps – to celebrate their respective PK wins. 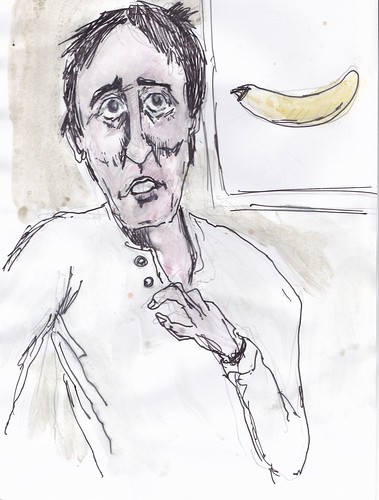 Matt Taylor: It’s not the size of your dataset, it’s how you use it that counts.
(sketch by Scott Renton)

With the PK prize handed out Paul Walk took over MCing duties for our Developer Challenge Show and Tell. He opened by thanking all of those who had taken part in the challenge and to our judges who this year were Bea Alex, Stuart Lewis, Padmini Ray-Murray and Paul Walk. He announced our overall winner, Russell Boyat, whose hack addressed the preservation of MOOCs. Russell then gave a great presentation of his idea, which you can view here.

Prizes were also awarded to two runners up. Peter Murray-Rust and Cesare Bellini’s Images in Scientific Publications and Chris Gutteridge’s Images with Creative Commons Licences. Both hacks were riffs on the same essential idea, an indication of the highly collaborative nature of the Challenge. Finally Patrick McSweeney presented his Preservation Toolkit, and Richard Wincewicz presented his Metadata Creator hack.

Paul then led a discussion of the Developer Challenge. Notably this year three of our participants had specifically asked not to receive a prize, they were in the Challenge to collaborate, to try things. And they want others to take part too, to see new faces. Chris Gutteridge’s presentation had included the call to arms:

We would really appreciate your comments, additions and perspectives to continue this debate. Please leave a comment here, on the Developer Challenge liveblog, note your comments when you fill in the Repository Fringe 2013 feedback form or email us.

The finale of the day, and RepositoryFringe 2013, was our Closing Keynote from Mark Hahnel. Peter Burnhill, Director of EDINA, introduced Mark with Robin Rice’s prescient prediction – ahead of the 2011 Repository Fringe – that “FigShare: could be the new data sharing killer app!”. 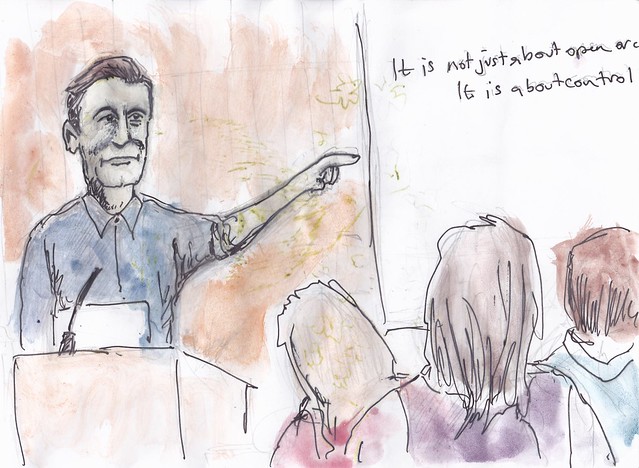 Mark’s talk was “PK-style” to reflect his Friday afternoon slot. Peppered with questions and asides his presentation provided both a fun update on FigShare (and it’s newest features) but it was also a broader call to arms for repositories to be more visual, more focused on the user. To really motivate people to share their data through stats, through control, through meeting their needs.

Mark also suggested that Repository Fringe 2014 could be quite a different beast:

The talk included a special slide just for Peter Murray-Rust. To view that, or any other part of the video of both Mark’s keynote and the lively Q&A, head on over to YouTube.

The event came to a close with a brief thank you and wrap up from Kevin Ashley, Director of the Digital Curation Centre, He reinforced that there will be a Repository Fringe next year and that the organising team really want your feedback to help ensure the event stays relevant and facilitate the community to meet, share ideas and share experiences in an enjoyable way.

As Chair of this year’s event, I’d like to add my own thanks here on the blog. Thank you to all of you that came or followed the event, particularly our speakers, our developer challenge participants and judges, our bloggers and twitterers and sketcher, and, of course, our fantastic sponsors and supporters without whom the event simply wouldn’t be possible. Finally a very special thank you to all of the lovely organising team behind Repository Fringe 2013.

What to expect next?

Over the next few weeks we will be following up Repository Fringe 2013 with a round up of blog posts on others’ blogs, guest posts here on the Repository Fringe blog, highlights in pictures and video, and some analysis of the #rfringe13 tweets. If there is anything you’d like to see added or updated just let us know and we’ll do our best!

Whilst we get those follow up posts and materials ready please complete our Feedback Form – let us know what you thought, what you’d like to see more of or less of next year, how we can change the shape of the Developer Challenge, whatever you’d like us to know: https://www.survey.ed.ac.uk/rfringe13/

I am Digital Education Manager and Service Manager at EDINA, a role I share with my colleague Lorna Campbell. I was previously Social Media Officer for EDINA working across all projects and services. I am interested in the opportunities within teaching and learning for film, video, sound and all forms of multimedia, as well as social media, crowdsourcing and related new technologies.